Secret is back with a brand new song. A new song that brings us back to the retro days and their award winning days. Shy Boy and Starlight Moonlight are the songs that brought Secret to higher grounds by winning awards. Did you know that? Their common theme, was the aegyo style. Poison and Talk That both ranked pretty high, coming 2nd in some cases, but did not have enough votes and popularity to win. As for Yoo Hoo, as it contains the ageyo style which many of us enjoy (men in particular), will they win? Or will Lee Hyori and 2PM take all the glory? Who knows?

Yoo Hoo is a very cute song. The title, maybe a little misleading, but overall the song pretty cool. I don’t have much to complain about the song. The only thing I have to complain about is the rap. Not the one at the end of the song. I have no problems with that. The ones in the verses, however, seemed to just be thrown in there to give Jung Hana some more lines (For those who don’t know, Zinger is Jung Hana. She just recently changed her stage name). The instrumental is quite addictive and the chorus was pretty cool. Their vocals have dramatically increases, each sounding better each time they make a comeback. The song talks about a girl who is trying to get out of the “friendzone”. I think. I may need to get back to you guys about that one.

The music video is quite funny. Hyosung was quite Hilarious in this video. But I will get back on that point a bit later. The music video starts off as the girls go on a holiday and a boat. They seem to be having the time of their life but soon becomes shipwrecked. Now, that boat looked like a bit grand. But why only does some planks of wood that comes from a different boat, maybe one a lot of cheaper, wash up to shore. They also seemed to be quite prepared for that. They have a mirror, dry set of clothes, a sand castle kit and an oar. Seems like they were not going to Bondi Beach or Surfer’s Paradise. An Australian Joke there. Anyway, they aimlessly try to find there way “off” the stranded island. They successfully find their way “off” the “deserted” island after finding a map and a guy’s jacket. Conveniently placed there. Just saying. Turns out they were not on the a deserted island, but near a rather busy highway. But it is how they get picked up is pretty funny. Here they let go of their shame and Hyosung, really acts silly here. But did you see who picked the group up! It was an old lady. Old Lady I say….

The dance is pretty cool. Liked how basic it was overall. The chorus and all were just perfect. However sport shoes don’t really seem to fit the feel of the song at all.

9.5/10. Really good. Will recommend to any fans out there. Linked below is also their Only U song as well. Have fun! 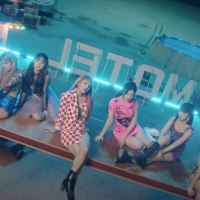