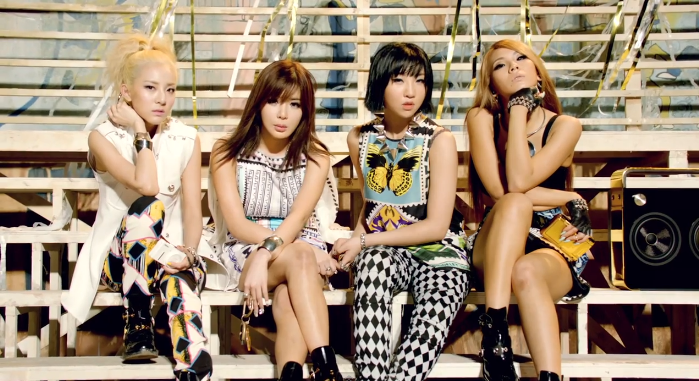 2NE1 has finally made their long 1 year return with a brand new style and song, Falling In Love. Shedding their dominant and 2NE1 style we all know the band for, they have changed to a more feminine and more loving style. However, I beg to differ. I find the song still has that 2NE1 feel to it, despite it being “different”. I was, too shocked, with their change though. It was quite sudden. I swear, they will lose a fan, if they do the cute style. Just a warning. They also just today, “Very 2NE1” for their August single. Now that plans have been confirmed, you will be expecting a review.

As for the song, let’s begin at the begin. That “Yap Yap Yap” note at the start was not needed at all. Basically, I was appalled with the start of the song. After that, I basically enjoyed the song. I was not disappointed, like how everyone else is. “Touch Me Over Here, Touch me Over There” did seem a bit dirty at the start, which really did seem weird. The start was amazing and the instrumental was pretty cool. Reggae and different. CL’s rap was much better than her solo debut, Baddest Girls, which I was really happy about. Park Bom and Minzy’s vocals were pretty cool as well. As for Dara, too much autotune. Really disappointed. The song itself, was really catchy. Well, it took me a few listens to get into the feel of the song, but I got there. Basically, the girls made me “Fall In  Love” with the song. Overall, actually satisfied with the outcome of the new style and song.

The music video was really lame. Like, it lacked everything that a 2NE1 video contains. Where are the really extreme horns and hairstyles? Where are the bats that break glass? Where is the angry faces and big sets that we all love the band for? You see, after a group creates a style, they should stay with it. If they are confident with changing styles, they have to be 150% sure that they will be okay, because if they don’t it could mean the downfall for the band. The music video was very summery, however the beach set looked fake as a photographer’s studio. The amount of gold (or items painted as gold) was over the top in the video. The video, too had, this mythological feel to it. It seem ancient Greek with the costumes the people were wearing. which looked really “unnatural”. 2NE1’s acting in the video really does suck. It seems forceful and really unnatural as well. However, I was really satisfied with the summer feel the video has and the solo shots throughout the video. They really seem to fit the band’s style. Overall, I was quite disappointed in the video, but felt it did fit the song.

6/10. Song, music video and dance was okay, but the whole comeback was quite disappointing. It could’ve been much better. Let’s hope “Very 2NE1” is “Very 2NE1”.