I believe this will be my final Catch Up Review for now. I don’t I missed out on a lot of comebacks and new songs during the last two weeks, so I shall start getting a move on with Big Bang and EXO’s reviews, since I promised that I would do them (to myself) since they have come out. As per usual, if you click on the subheadings below, they shall take you the music video. 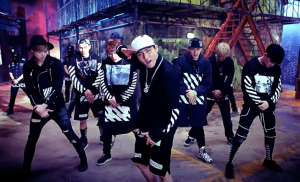 If you guys know me, I am not a big fan of the hip hop genre. And why I even bother reviewing such songs beats me as well. I know there can be some great songs from the genre, me being a fan of many songs and artists, but this really does not impress me. It is a powerful song and their skills in rapping and singing just is amazing. The only problem is that, I find the song lacking in parts. There is hardly any backing vocals in the song, especially for the rap. I don’t know how exactly rapping works, but I personally feel like it there was some sort of backing vocal, there could have been more depth. Music video and dance fitted the style of song though, so not everything was a disappointment for me, for this debut. But I honestly think that they can do better, cause beside that it just sounds “typical”. 3/10

Seventeen has finally debuted!!! After 5476593 years of making fans wait, the 13 member band, called Seventeen has been unveiled. WAIT what??? Hmmm… we were promised 17 members with an average age of 17, not 13 members with the average age of 17. And they are going to age, so that 17 number is going to become useless soon. Don’t kill me for saying that. Amazing song. It drew me in from the very start and I have been playing this song so much. I put this song as the best song for May. Sure, it does kind of fall in the typical boy band debut song category, but I feel the spread between vocals and rapping in this song is pretty even. For the instrumental, it was a really nice pop-ish sound. Music video could have seen a little more investment. It just looks cheap. I am amazed at how they managed to fit all the members into the dance and song. Yeah, some of them have the 1 line (which should be improved on), but considering the amount of members, it was bound to happen. 8/10

After CN Blue and FT Island, comes N.Flying. This band has finally made their own debut as well, after being promised for a year or two from FNC Entertainment. I love the mix at the start with the classical piano, the rapping and also the rock sound. The song is very catchy and I got hooked on. I don’t listen to them much, but the song did enough to put them onto my radar and list of best rookies. I like the bridge of the song. They are a band, so there is no choreography, unless you consider bouncing around on stage to the music a dance, which technically means, I must be a professional, since that is what I do. Too many commas. The music video was good. I love the glass box at the end. You could tell they got something decent in terms of budget. 8/10