One of the power rookies of 2015 has finally returned with their long awaited comeback. Yes, I am referring to Twice (if you completely missed the title) and they have managed to do it again with their latest song: Cheer Up. Since release, it has stayed at the top of the charts and managed to crush any artist who dares to even attempt to compete for first place. They have managed to receive multiple certified perfect all kills and won many weekly music show charts. Just more to add to their power rookie status which probably has flung them into the ranks of the artists that took many years to gain momentum and popularity.

While many people are feeling this song, I am quite disappointed with what they release. We all expected a song that was even more addictive and catchy, a song that could top Like Ooh Aah. Some people do think it is a track that can do that, but I don’t think it is a good enough track to top their debut single. This song isn’t bad or anything, it just didn’t captivate me as Like Ooh Aah did. First of all, these girls can sing, but their pronunciation of the words threw me off. Cheer Up sounded a lot like “Turn Up” or “Cher Up” (with a heavy c sound). I have a very big problem with artists who can’t even pronounce the name of the song with bad pronunciation. Call me harsh, but honestly, I am sure the main vocalist can do a better job. The rapping fell below expectations and that the song wasn’t catchy enough. The “Shy Shy Shy” part was ridiculously embarrassing and childish, and I don’t even know why everyone like that one line. And that “Be A Man” breakdown during the bridge just did not fit in with the song. It felt disconnected. Their vocals were good though (just something needs to be done with their live voices) and the song was equally as bright as Like Ooh Aah. From everything you have read thus far, you can probably see that the song doesn’t sit well with me and the flaws (in my opinion) outweigh the good.

I didn’t like the cheerleading concept they were going for, but I loved the rest of the video. I would have been fine if just one member did the cheerleading concept, like how every member had a different theme (or movie reference) and then the girls regrouped for a different movie reference. I liked it how everyone had their own thing. Refreshing and different from every other video. The girls each parody another female movie character who became iconic female characters in a variety of genres. I would list the different movies out, but I can’t actually the list of the movies anymore (Yes, I have been browsing the comments on YouTube). The music video was much brighter and fitted the season more, than their debut video, which had a bright song but a dark video. Only thing creeped me out was the camera dude. Much creepy. But overall, I liked the video a lot.

The dance was underwhelming. Not as catchy or cool as Like Ooh Aah. This dance had the awkward rope pulling dance for the chorus and that just looked a little too weird. Also, the breakdown at the bridge  was a little too unfitting for me. I have no trouble with what they are going for, but I thought they could have been a little more creative. Well, that last point really is what I felt when I watch the performances.

Sorry Twice. I had a lot of high expectations and Cheer Up just did not live up to those expectations. But congratulations on the success. You girls definitely deserve it after last year. 4/10 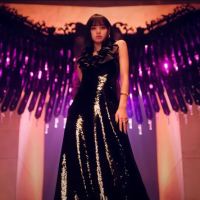