GFriend has returned with their first album. The girls are currently the hottest trend in South Korea and have confirmed their popularity with the release of Rough at the start of the year. Now they are back and are looking to further cementing their title as one of the most popular groups in South Korea at the moment.

Initially, the song felt quite dead and boring. It really did not yell out GFriend or sound as similar to their previous 3 songs. However, after listening to multiple times, the song has grown quite  a lot. To the point, where it claimed 4th place on my weekly charts. For a song that I did not quite get for most of the last week, it rose pretty fast towards the end of the week. Anyway, the song is really good. I love the “na-na-na-navillera” part of the song. So catchy. I would have liked it more if the chorus had some sort of bass or some other instrument to make it “heavier”. The vocals were great, though I felt at times during the song, it felt quite flat. But what we have already sounds amazing and I really enjoy listening to the song. The instrumental itself is pretty good as well. The start sounds a lot like Infinite’s The Chaser. Is it just me, when it comes to that observation? And I think I have figured out the formula for GFriend’s successful song. Each of their songs has allowed for an instrumental break. This gives the girls to showcase their moves while on stage, but also hype the crowd with what is to come (i.e. the high notes).

This video reminds me of Me Gusta Tu quite a bit. Not that is a bad thing because this video is shot in a completely different style and manner. Both videos showcase the girls having fun with each other. The other video followed their school trilogy, while this one shows a much more mature look and rollerblades. I love how one girl sings, and while the girls have fun, it spans to another member to sing the next line. Okay, it sounds terrible in words, but it is as if the camera is a person looking around the room and seeing the next member sing each time. Not fond of the home video concept, though. There is also an air of mysteriousness that hovers around the video, though I am not really sure why I have that feeling and why that is the case. Everything else looks quite polished, but those scenes filmed with the home camera (back in the day) kind of ruins that feel. But I guess it fits with the retro vibe the song had going. Overall, I think it is a great video which gives off a fresh feel, well fitting for the season of Summer in Korea.

The dance was a little underwhelming. I think the chorus could have followed on with their previous dances. Each of their previous dances has had a memorable dance move, but this one doesn’t have one. Or I have yet to see one that I can associate with this song. But that dance break was amazing. I love GFriend dance breaks. They look so cool and it shows different sides to the group that we do not commonly see.

Before I leave, these girls have basically started the new trend of dancing to songs at 2x the speed. Did you guys see their latest Weekly Idol appearance where they danced to Navillera, Glass Beads and Me Gusta Tu at 2x the speed? Amazing. 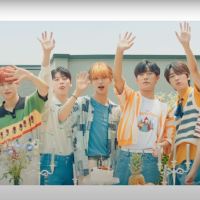