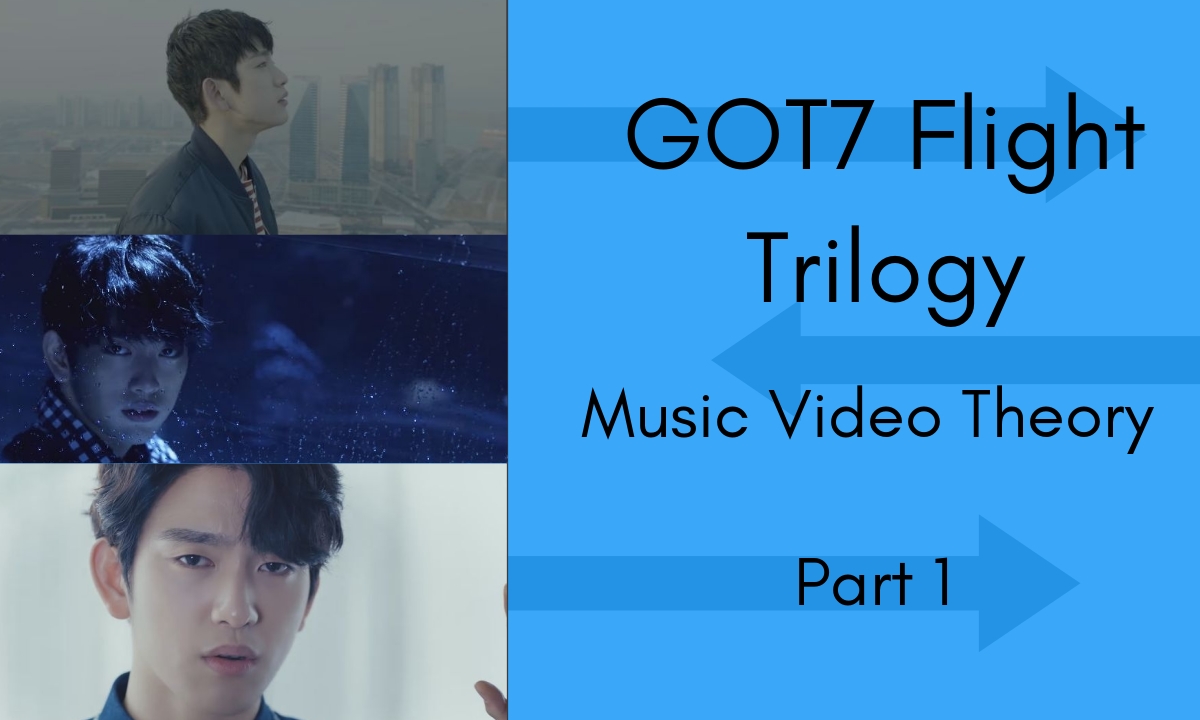 Please note that this theory may not be right and is just my understanding/take on the video. This is also a very long post!

Welcome to my theory for GOT7’s Flight Trilogy, which was released over the 2016-2017 period. A total of 6 videos formed this theory (Departure Trailer, Fly, Turbulence Trailer, Hard Carry, Arrival Trailer and Never Ever). If you have yet to watch the videos, I have linked a playlist below for your viewing pleasure.

For this theory, it will be extremely tedious to write out each member’s name. So I will be using the following key when referring to the members:

The entire video starts off the series with GOT7 going on a road trip. JB is driving while the rest of the members are having some fun. Notice what some of the members are doing (JS is filming the road trip, BB’s face is being drawn on, JB is close to a bird and MK is listening to music). In the midst of all of this, JY goes to sleep.

He wakes up in a foggy environment and it seems he is the only one present in this scene.

JY then wakes up in the room, surrounded by the members. Take note of the surroundings and the members, everything seems to be a replication of the van that they were travelling in the initial scenes (the walls are littered with stickers and graffiti of the same kind seen on the van’s windows, JS is still filming, JB is holding a bird etc.). During this time, JY realizes something is up when JS turns to film JY but simply pans the camera over him (as if he isn’t there). He does make eye contact with MK in the room, who seems to know he was there.

He wakes up again and finds himself in the van. Everyone is outside. Like in the room, JY does not interact directly with the members nor do the members refer to him, regardless of what is going on. Once again, we see a similar replication of the van (i.e. graffiti on the ground is the same type as on the windows of the van and the walls of the room; same goes for the stickers; JS is filming again). JS’s footage catches YJ flying, with JS following soon after. BB, YG and MK are seen flying soon after. JB isn’t seen flying with the others but instead floats on top of a bed, with 5 other birds flying around with him (the birds signify the other members minus JY).

JY wakes up once again, this time around he is standing on top of a building and he falls down.

Personally, I do not think we can really interpret much from this. It isn’t until we get to the later videos that we can start connecting things together to form a proper story (i.e. why the members are flying; why JY is alone and cannot interact with the members; what really happened to the van).

The music video continues on where we left off in the trailer. It is assumed that JY falls off the building and join in with the flying fun. But it turns out he is the only one unable to fly and this only becomes a realization once he continues to drop while his friends continue to fly about. Also, I think at this moment he realizes that something bad happened to his friends, which can be implied through the teardrop while falling down. The rest of the members see JY falling down very fast. He then eventually falls into the mist and wakes up once again.

The music video’s second half is all we got to contribute to the storyline but it is probably one of the most defining moments of the trilogy. However, what did actually happen to his friends has not been explicitly visualised in the music video. It has only been implied. All we know for now that JY is alone and he knows he is separated from his members.

We deviate a little from the storyline in this video with the entire GOT7 group on a flying plane. The members are mucking around of the plane in a similar manner to the car trip (JS is filming once again, BB’s face is drawn on again and cushions are thrown about). JY, on the other hand, is watching their antics once again but sitting away from the members. He also listens to music, which he does with MK during the car trip.

The plane then experiences some turbulence. JY tries to get to warn his friends however the flight attendant tells him to remain put. The rest of the group, ignoring the warning messages and lights, continues mucking about. The turbulence gets worse, so JY tried to warn the members once again but was held down by the same flight attendant (who also forced an oxygen mask onto him).

The video then shows JY sliding into a tank filled with water. He then wakes up, realizes where he is and struggles within the tank. We then are shown YJ opening a birdcage and removing the bird from its confines. We are then returned to the plane with the other members, along with flashbacks from both the Departure Trailer and Fly music video.

JY then wakes up at the scene of a plane crash. He is saved by paramedics but none of the other members are around. He turns to the side to see JS’s video camera lying about with footage from the trip.

I think this is the video that confirms that the members (excluding JY) are dead. The plane isn’t real but rather another representation of the van seen in the Departure trailer (proven by the presence of the footage on the camera).  The video also gets somewhat cryptic with the YJ’s scene. My guess is YJ is freeing JB from the confines of the cage, as JB is the only member with a bird during the Departure trailer (and isn’t represented by a bird when he dies).

Due to the length of this post, I have decided to split it into two different sections. This is Part 1. To view Part 2, click here!