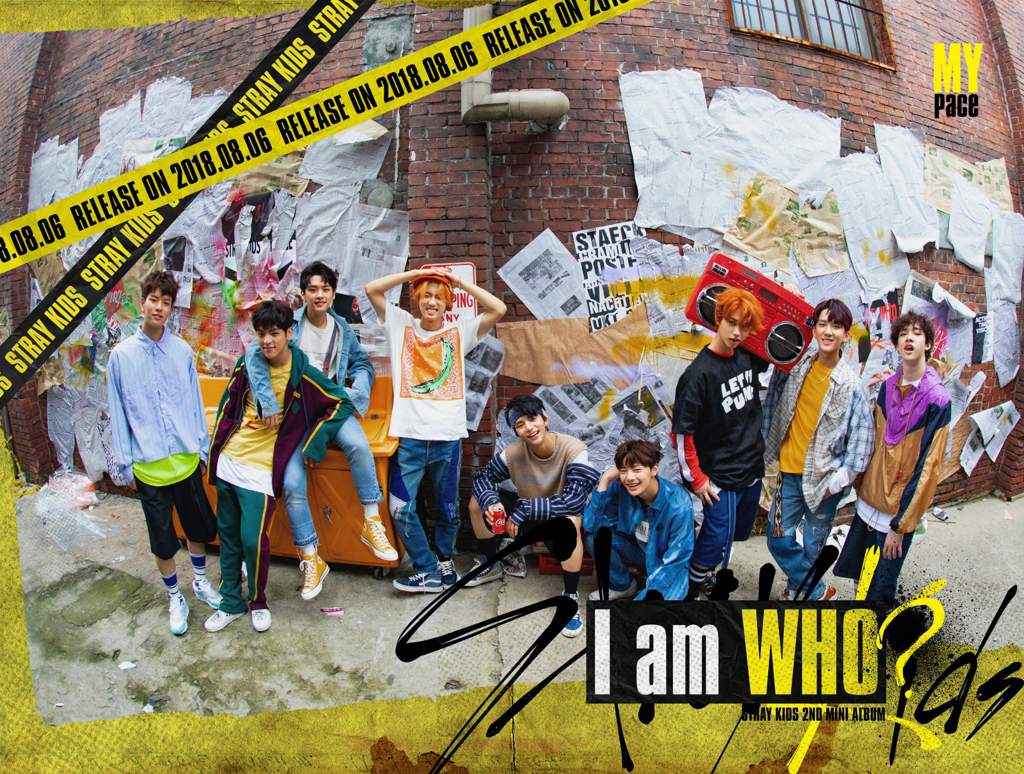 This is the final “catch up” album review as I plan to get started on some album review for new releases this weekend. This is also the first time I will be reviewing Stray Kids’ album, who made their debut earlier this year with District 9. However, I am WHO? is the title for their more recent album, which features My Pace (link below) as the main title track. The group has also been releasing performance videos (or mv-like videos for all their tracks, so I linked down below so you can view them (simply click on the link at the title of the song).

1..WHO? – I do not commonly review the introductory track. But this one was much longer than most intro tracks and featured lyrics, which isn’t something too common. It is performed by Woojin, Felix and Han. A few of the titles of the songs on the album pop up in this track but I think it was a coincidence rather than intentional. I like the vocal and rapping elements in this introduction, my favourite being Woojin’s whispering. (8/10)

3. Voices – Voices is the hip-hop song that fulfils my craving for hip-hop, a genre that I don’t often delve into. It reminds me of the hip-hop songs that you commonly get in the Western industries back in the ‘00s. The song has a very impactful sound that is very rough around the edges but is quite heavy in terms of emotion. I thought the song showcases both their rapping and vocal potential, something I haven’t heard from them yet. I really like the roughness and intensity that the rappers bring to the song and the chorus was superb and melodic. (9.5/10)

4. Question – Question gets the album on a more upbeat and energetic note. In this song, we see different rap and vocal styles that we haven’t heard on the album yet. Whoever did the whispering rap section that opened the second verse sounds so good (I have replayed the song multiple times for that one section). I like entire chorus as it is however thought Felix’s English hook post-chorus extremely catchy and the main selling point of the song. The song does feel like it is missing something though, but I cannot pinpoint what that is. (8/10)

5. Insomnia (불면증) – While I did like other songs on the album more than Insomnia, I think it was the first song to jump out at me to confirm its album review. I thought the song was extremely dynamic, with its soft start and very unexpecting chaotic chorus drop. The fluctuations in the energy from the different sections is very interesting, which I think makes sense given the title of the song. Once again, the vocals and raps were quite good. But since I tend to listen to albums prior to going to sleep, this one isn’t too ideal for that period. (8/10)

6. M.I.A – I personally do not like to label songs as the ‘weakest song’ but it gives you an idea of what type of songs I like from an artist and what I don’t like. This one was a miss for me. I am not a fan of heavy autotune, so with majority of the song being filtered with the autotuned didn’t do much for me. On the plus side, however, the song was quite smooth. Vocals were good but I think some of the rapping in this song was more enjoyable (as it gave the song some roughness to offset the smoothness). Besides that, I don’t have much to say about the song. (6.5/10)

7. Awkward Silence (갑자기 분위기 싸해질 필요 없잖아요) – Ending the album is Awkward Silence, which is extremely fun and playful. A different route once again when compared to the rest of the album. I actually really like the song. The crow squawking during the ‘awkward silence’ just before the chorus was a very nice touch and gave the song that ‘not-so-serious’ element. I thought the bridge of the song was quite nice and Felix’s random inserts were quite enjoyable (also love the Australian accent that trickles in – Australia Represent!). It ends the album on a happier note, which I quite like. (9/10)