We haven’t heard too much from the members of 2NE1 since their disbandment in 2017. But today, we are extremely likely to witness two members in one music release. Park Bom makes her solo comeback for the very first time since 2NE1’s disbandment, her departure from YG Entertainment (she is now signed to a company named D-Nation Entertainment) and the release of Don’t Cry back in 2011. (That means this is her first solo release in 8 years). The track is titled Spring and features fellow member Park Sandara, who I believe is more active on variety shows recently.

Spring is an R&B track made up of standard instrumentation that gives off a remarkably grand feel. I find this fitting with her previous two singles as they didn’t have a mind-blowing instrumental but the song managed to be very appealing at the time of its release. There were a few things within the instrumentation (or background) that stood out for me. The first is the piano, which I thought gave the song a delicate touch. The second would have been the ‘Bom Bom Bom‘ part and how it was accented/emphasised by the instrumental at the very end of the chorus. The third has to be the most appealing aspect of all, the use of background vocals. The way managed to compliment her vocals really boosts the song up a fair bit. Talking about her vocals, I found that her distinctive nasal toned voice wasn’t as present here. And because of that, we got to hear more of her in a way that we really haven’t before. Along with Park Bom, Sandara does an amazing job showcasing her both vocals and rap in her section. I thought her features were rather nice as it serves as a mini-2NE1 reunion but also gives the song something ‘more’ (and hence preventing the song from becoming too linear/consistently plain).

One thing that is clearly absent in this video is YG’s quality. Her past videos have been of a similar typical nature. But with YG’s quality, a typical video could look a lot better. This lacks that and it is just a typical music video for me. I do have to admit though, her presence in the garden scenes and the lighting in this video does make it seem intriguing at first glance. I also thought her outfits were nice and contrasted nicely with the sets that we saw.

To fit the electronic side of the song, there is choreography. However, Park Bom doesn’t really participate much in the choreography department. I guess it is for her to focus on her singing. But I think another factor is her dress. I watched her showcase just now and I was honestly scared for her. I thought she was going to trip on her train/tail. And because of her outfit, her moves come off quite weak. The rest of the choreography was okay. But I am not particularly drawn to it. 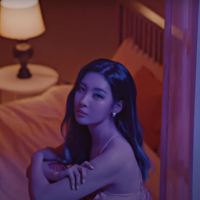